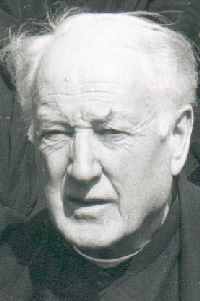 Fr Aelred was born in London in 1899 and educated at Stafford Grammar School. He was received into the Catholic Church in 1916. During the last year of the First World War he served as an Observer in the Royal Flying Corps. He entered the Ampleforth Community in 1919, being ordained Priest in 1927. There then followed a very active life on the Ampleforth Parishes, broken by a period as Chaplain to the Royal Air Force during the Second World War, where he served mostly in North Africa. His pastoral work on the Ampleforth Parishes saw him serve as an assistant Priest in Leyland, Warrington, Cardiff and Liverpool. At the end of the War he became Parish Priest, in 1946, at Easingwold, before looking after the Parishes at St Anne’s Edge Hill Liverpool and Maryport. After a brief period assisting at Leyland he came to Parbold, as parish Priest, in 1957. When he succeeded Fr Gregory Swann Parbold was ceasing to be a remote community and its attraction as a place of residence to people whose professions take them to Liverpool, Manchester and beyond started to develop. A new Primary School was built during his tenure. Leaving Parbold in 1972 Fr Aelred moved to Richmond North Yorkshire, then Warwick Bridge and Goosnargh. In 1984 he retired to the Abbey, aged 85! Fr Aelred died in the St John of God Hospital Scorton on 21 November 1989, and is buried at Ampleforth.