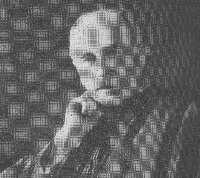 Fr. Frederick Aidan Crow. He was a native of Louth, Lincolnshire, being born there of non-catholic parents, in 1863. He joined the community at Ampleforth in 1887, where he subsequently became Procurator from 1895 – the year he was ordained – until 1898, when he went to St Alban’s Warrington. From 1906 until 1910 he was Secretary to the Benedictine Bishop, Cuthbert Hedley. From 1913 until 1917 he was resident at Belmont – the Common House of Studies for the English Benedictine Congregation, as a member of the Newport Cathedral Chapter there. In 1918 he became Parish Priest of Maryport, in Cumbria before being transferred to Parbold in 1928. During his tenure as Parish Priest the St John Rigby window was erected, a gift of his co-lateral descendants. At about this time the Lourdes window at the back of Church was donated by the Polding family of Parbold. Originally belonging to Brindle, this old Lancashire Catholic family counted Archbishop Polding OSB, of Sydney, among its members. For some years Fr Aidan’s health was uncertain, and for the last six months of his life he was a confirmed invalid. He died at Stillington Hall York, on 25 August 1941. He is buried at Ampleforth.