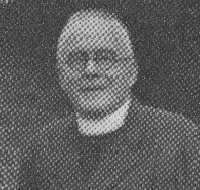 Fr Ambrose Byrne, although brought up at Rock Ferry, on the Wirral, came to Ampleforth from Glendalough, County Wicklow. He was one of the pioneers at the new Ampleforth Hall at Oxford University. After ordination he became first Prefect at Ampleforth College, in1912, before becoming an Army Chaplain in 1916, during the First World War. After the war came a few years at St Alban’s Warrington before he was placed in charge of St Mary’s Cardiff. As a business manager he was amazing – like one of his predecessor’s. Fr Wilfrid Darby, Fr Ambrose too was Inspector of Accounts for the English Benedictine Congregation, from 1934 until 1950. He embellished the Church at Cardiff and enlarged the Priory, yet still managed to save money.

Unfortunately the strains of war-stricken Cardiff affected his health, and his brother, by then the third Abbot of Ampleforth, moved him to Parbold, where he arrived in the summer of 1941. The following year he asked his brother, the Abbot, for a move. He was sent to St Mary’s Brownedge, Bamber Bridge, where, his obituary states "he infused new life into every department of its activities". Fr Ambrose was also an excellent preacher he always had something worth saying and he said it well.