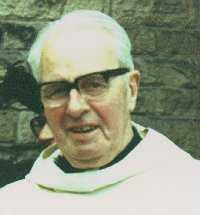 Father John Francis Bernard Boyan was born in London in 1910. Educated at Ampleforth College he entered the Monastery there in 1928, being ordained Priest in 1937.

For the next twenty seven years he taught Physics at Ampleforth and was a Housemaster from 1950 until 1964.

He then became the first Catholic Chaplain at York University where he remained for six years. In 1970 he went to the Ampleforth parish of Saint Mary’s in Cardiff where he was Parish Priest. From 1977 until 1982 he became Vicar for Religious in the Liverpool Archdiocese.

From 1982 until 1989 he was an assistant Priest at Liverpool Cathedral before retiring to the Ampleforth Parish of Saint Mary’s Brownedge, before moving to Our Lady and All Saints as Assistant in 1992.

Unfortunately a bad fall and a series of strokes meant that he had to return to the Abbey in 1993, where he died on 17 May 1997.