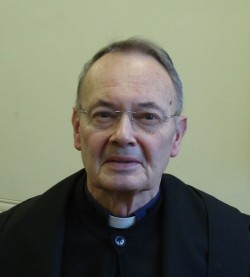 Father William Cassian Dickie OSB, Priest in Residence 2016-2017 Father Cassian was educated in Aberdeen and at Aberdeen and Edinburgh Universities. He became assistant Head at St David’s High School, Dalkieth. A convert to the Catholic Faith he entered the Benedictine community at Farnborough Abbey in Hampshire before entering the Ampleforth community in 1990. A Housemaster in Ampleforth College as well as Junior Master and Master of Studies in the Abbey Father Cassian looked after the local Parish of Kirkbymoorside, before becoming Parish Priest of Warwick Bridge (Cumbria), followed by Knaresborough, and Priest in charge at St Austin’s Grassendale, Liverpool. Whilst a member of the community at St Benedict’s Monastery, Brownedge Fr Cassian came to Parbold to be the Priest in Residence during Father Gordon’s absence from 2016 until 2019.