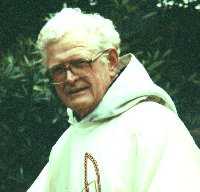 Father David O'Brien was born in 1925 at St. Annes, on the Fylde coast and educated by the Jesuits in Preston,  Fr. David served in the Royal Navy for four years, 1942-1946.  After four years in business he became a monk of Ampleforth and was ordained in 1958.   He taught in the school and served in Cardiff and at St. Mary's, Warrington, before his appointment as Parish Priest of Parbold in 1973.

In 1977 he was made Dean of the Ormskirk Deanery, by Archbishop Worlock.   During his tenure, phase 2 of the school was completed (2 new Classrooms and alteration of the School Kitchen and Offices). He also made extensive renovations made to the church, cemetery, car park and grounds.

Father David brought the High Altar forward four feet from the Reredos, dropping the level by two steps. He brought the Font from the rear of the Church to the former Pulpit site at the front of the Church, removed the Altar Rails and carpeted the floor of the Sanctuary and Aisles. New lighting, and overhead electrical heating were installed. He renovated the Sacristy, installing a kitchenette, rewired the whole Church, replaced the Organ and constructed a Day Chapel at the rear of Church. All this was done in time for the Church's centenary in May 1984.

He left the Parish in February 1990 as a result of ill health going to Saint Mary's Brownedge, Bamber Bridge.   In 1997 he returned to Ampleforth becoming Priest in Charge of Saint Mary's Helmsley until July 2000, when he was sent to St. Benedict's Monastery, Brownedge.

Father David died at Ampleforth on 26 November 2014, in his ninetieth year.