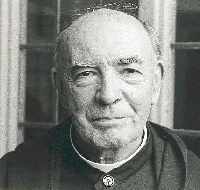 Father Patrick Francis Vidal was born in London in 1919. Educated at Ampleforth he entered the monastery there in 1937. Whilst a Monk studying at Oxford University he played for the University XV for two seasons. Returning to the Abbey he was ordained Priest in 1947. Two years later Fr Francis went to the Ampleforth Parish of Workington as assistant Priest to begin fifty years service on the Ampleforth Parishes. From Workington he went to Saint Benedict’s Warrington, nine years later to Saint Mary’s Harrington before being moved to Saint Mary’s Bamber Bridge. In 1970 he was appointed Parish Priest of Our Lady and Saint Wilfrid’s Warwick Bridge, Carlisle where he remained for twenty years. In February 1990 he came to Our Lady and All Saints, Parbold, to act as Administrator until January 1991 when he became Supply Priest at Our Lady and Saint Gerard’s Lostock Hall. In May 1992 he retired to Saint Mary’s Bamber Bridge but still continued a very active life in the Priestly ministry – dying suddenly after his Sick Communion round on 18 February 2000.