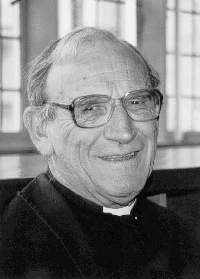 David Gerald Hughes was born in 1929 and was educated at Ampleforth College. In 1947 he went to the Royal Military Academy at Sandhurst before being commissioned in the Royal Artillery. He served with the British Army on the Rhine from late 1948 until November 1952.

In 1953 he entered the monastic Community at Ampleforth and was ordained Priest in July 1960. He spent the next twenty-six years teaching at Ampleforth's Preparatory School, Gilling Castle, including a brief period as Acting Headmaster.

For twenty years he worked on some of Ampleforth's Parishes, including St Mary's Cardiff, St Benedict's Ampleforth Village and St Austin's Grassendale, Liverpool.

From November 1998 until June 1999 Father Gerald acted as Priest in Charge at Our Lady and All Saints, Parbold.