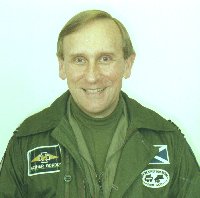 Father Jack Gordon Beattie was born in Lanark, Scotland, of a Scottish father and Irish mother. Educated at Ampleforth he entered the Monastery there in 1959. From 1963 until 1967 he taught at Ampleforth, where he was ordained Priest on 16 July 1967. In September 1967 he went to St Alban’s Warrington. He taught in the Boteler Grammar School Warrington (where he was also Chaplain), was Chaplain to English Martyrs RC High School, assistant Chaplain to HM Remand Centre Risley. In 1977 he moved to St Mary’s Leyland, although in 1978 he spent six months in the Benedictine Monastery in Nigeria. At Leyland Father Gordon was Chaplain to HM Prison Wymott. In 1980 he left Leyland to enter the Royal Air Force as a commissioned Chaplain. The history of St Mary’s Leyland states "Father Gordon got us singing"! His 12 years with the RAF were spent at RAF Locking (+ RAF St Athan): RAF Bruggen: RAF Cranwell (+ RAF Swinderby and RAF Coningsby) and two tours at RAF Kinloss (+ RAF Lossiemouth and RAF Saxa Vord). He was the first Chaplain to fly in a Tornado F3. He served during the 1st Gulf War, in Saudi Arabia, Oman, Bahrein and Kuwait. From 1967 until 2002 he was the Editor of the Benedictine Yearbook, a Directory of all the Monks and Nuns who follow the Rule of Saint Benedict in the British Isles and their overseas foundations. On leaving the RAF he made a 50,000 mile world tour of the 28 overseas Houses in the Yearbook to publish a historical geographical and photographic record of them in his book "Gregory’s Angels". Father Gordon is a member of the Chartered Institute of Journalists and a member of the National Union of Journalists In 1992 Father Gordon returned to Parish life at Our Lady of Lourdes and Saint Gerard Majella Lostock Hall. He remains in contact with the RAF as Chaplain to 2376 Sqn ATC – Bamber Bridge. At Lostock Hall he renovated the Presbytery and re-organised the Church Sanctuary in time for its consecration by Cardinal Basil Hume OSB in 1995. On 1 September 1999 he became Parish Priest of Our Lady and All Saints Parbold. At Parbold Father Gordon renovated the Priory, and in 2003 refurbished the Church bringing the Sanctuary and High Altar closer to the Congregation, returning the Font to its original site at the back of Church and turning the rear Day Chapel/Cry Room into a Parish Meeting Room with Kitchenette. As part of the refurbishment he also installed new Lighting and twenty-four new Radiators. In 2016 Father Gordon moved to Ampleforth, running the Parish from the Abbey and returning once a month to Parbold. Having reached the Canonical age for retirement of Parish Priests he was obliged to retire as Parish Priest on Easter Sunday, 21 April 2019.