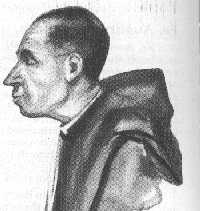 Father Ernest Gregory Swann was born in 1887 at Merton in Surrey. An Anglican, he was educated at Lowestoft College and St Edmund’s Hall, Oxford where he read for a degree in Chemistry. He was received into the Catholic Church in March 1909 entering the Ampleforth Community in 1911. Fr Gregory was ordained Priest in 1919 and held a number of offices in the Community whilst teaching Science in the School. He was at various times sub Procurator (1914-1918), Master of Ceremonies (1919-27) and sub Novice Master(1923-27), as well as being in charge of the local Parish of Helmsley for eight years.

From 1927 until 1958 Fr Gregory served on the Ampleforth parishes. Serving at St Mary’s Cardiff and St Anne’s Liverpool he was also parish priest of Easingwold and Lostock Hall (where he remained for fourteen years) before coming to Parbold in 1956.

At Parbold Fr Gregory made a plan and wrote an account of the Rose Window above the High Altar………………………………….

After only one year at Parbold Fr Gregory asked if he could return to the Abbey. Here he lived in retirement until his death, in York, on 31 March 1974. Fr Gregory will be remembered for his assiduous pursuit if the three Ls – Latin, Liturgy and Laughter. Sometimes simultaneously!