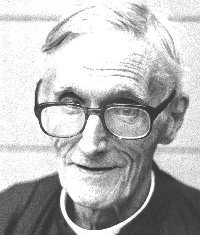 Father Thomas Clayton Leonard Jackson was born and baptised in Our Lady and All Saints Parish, Parbold. Fr Leonard was Assistant Priest to the Parish at the time of his death on 23 February 1999. Educated at Ampleforth, he joined the monastery there in 1937. During his early monastic career he had to serve in the RAMC as part of the pre War call-up before being released. He was ordained Priest in 1945 and spent the next fifteen years teaching Geography at Ampleforth College, being Chaplain to the Domestic Staff and running the College Kinema. In 1960 he was sent to the Ampleforth foundation at St Louis Missouri USA where he became Deputy Headmaster. He returned to England in 1971 to become Assistant Priest at Our Lady and Saint Gerard’s Lostock Hall. In 1976 he was appointed Parish Priest of Saint Mary’s Bamber Bridge. In 1986 he retired to become Assistant Priest at Saint Austin's’ Grassendale Liverpool. In 1993 he came to Our Lady and All Saints Parbold as Assistant – complete with his Cigarettes, Model Railway and Cups of Tea. Father Leonard took ill in Parbold Village on the morning of 23 February 1999 and died in Hospital at Southport that evening.