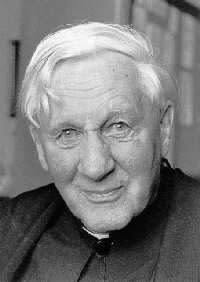 Father Anthony Martin Haigh was born in 1922. Having been educated at Ampleforth he joined the monastic Community there in 1940. Having studied at St Benet’s Hall Oxford, he returned to Ampleforth where he was ordained in 1949. At Ampleforth Father Martin taught Art and French as well as being Games Master and an Office in the Combined Cadet Force. In 1963 he became Housemaster of Saint Bede’s House, in succession to Cardinal Hume.

In 1977 Father Martin returned to the Monastery to become Junior Master and Guestmaster before moving to Saint Austin’s Parish, Grassendale, Liverpool, in 1981. In 1997 he again returned to the Abbey – this time to become assistant Priest in Ampleforth Village.

Father Martin is an expert Artist and is renowned for his talks on the Shroud of Turin. For thirty-two years he organised the Ampleforth Pilgrimages to Lourdes. Father Martin supplied at Our Lady and All Saints from June 1999 until the arrival of Father Gordon on 1 September 1999. Fr Martin died at Ampleforth on 31 January 2015, aged 93.