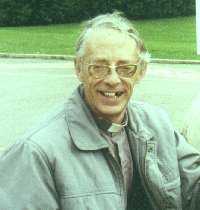 Father David Michael Phillips was educated at Ampleforth College.   He entered the Monastery at Ampleforth in 1952.    After studying for a degree in Maths, Moderations and Physics Finals at Oxford University and becoming a qualified Rugby Union Referee, he returned to the Abbey to be ordained Priest in 1962. For the next seventeen years Fr Michael taught Physics at Ampleforth College, becoming Head of Physics and Senior Science Master before being appointed Procurator of the Abbey and College in 1979. After holding this post for twelve years he was appointed twelfth Parish Priest of Our Lady and All Saints Parbold on 1 January 1991.   In November 1998 he left Parbold to become Parish Priest of the Ampleforth parish of Our Lady Star of the Sea and Saint Michael’s, Workington.