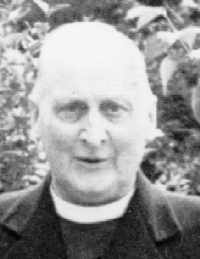 Father Herman Alexius Chamberlain was born in Liverpool in 1887.  Fr. Alexius was ordained in 1915. As Parish Priest of St. Mary's, Warrington, 1929-1942, his numerous utterances and activities earned him the sobriquet "pulpit, platform and press".

Father Alexius came to Parbold in 1944 as Assistant Priest before becoming Parish Priest in 1946.

When he reached his monastic golden jubilee in 1955, he installed the two windows in the Lady Chapel depicting his patrons, St Alexius and St Herman the Lame, a Benedictine monk credited with having composed the Salve Regina.

Fr. Alexius was a man of dominant personality and forthright speech. Yet he was always quick to recognise service rendered. He wrote from Parbold "I have been aided both in church and school by a small group of devoted workers". Three of these were Robert Abram (1888-1965) who in the days before central heating came three times a day to stoke the church fire, all through winter. Another was Wilfrid Whittle (1896-1976) gardener, gravedigger, bellringer and collector. Both were baptised in the church and are buried in its cemetery. The third was James Cornwell (1904-1982). Illness compelled Fr. Chamberlain to retire to Brownedge where in recognition of years of faithful service he was given the titular dignity of Abbot of St. Mary's, York. He died in 1965.