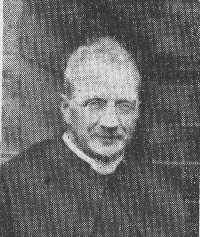 Father Gerard Blackmore’s parents came from Bideford in Devon, and were related to the author Lorna Doone. Both converts to the Catholic Church they moved to Ilkley in Yorkshire where Fr Gerard was born in 1882. Educated at Ambleside and Ushaw he joined the Ampleforth community in 1904, being ordained Priest in 1913. Obedience called him almost immediately to work on the "Mission" where he laboured for the next thirty-six years. Fr Gerard served at Warwick Bridge, Brownedge, St Anne’s Edge Hill Liverpool, St Benedict’s Warrington, St Austin’s Grassendale, St Mary’s Warrington, and Knaresborough before arriving at Parbold in 1942. He was a man of prayer spending many hours in front of the Tabernacle. It had been part of his apostolate for many years to go to the assistance of old and infirm priests. He appreciated the beauty of the Lake District, as well as Music, Art, Craftsmanship and Literature. After only four years he left Parbold in 1946 for St Joseph’s Brindle, Hoghton, where he died on 3 June 1950 and is buried there.